At a time when gender balance is a topic thoroughly in the spotlight throughout the media, I felt I would delve into the history of women in advertising and showcase the true power of the female voice.

Advertising is a key part of our popular culture and having spent years writing and narrating copy for the likes of L'Oreal and YSL it make me reflect on just how far has the female voice come in this industry. Here I take a brief look back at the evolution of the female voice in advertising and note some of the reasons why a female Voice Over (VO) may be more suitable for your media campaigns.

A history of women’s voice in advertising

Gender roles in our society have changed dramatically since the 1950s, and so too have our adverts. The progress that has been made in media concerning the portrayal of women and gender equality, mirrors how society has developed over the past 60 years.

In 1972, English author John Berger famously summed up the roles of men and women in media by stating, “Men act and women appear.”  It was often the case that women were simply in the frame to sell a product, but not to speak. This was supported by Jean Kilbourne’s 1979 documentary film series “Killing Us Softly” which shed further light on to gender bias in advertising.  Having produced periodic, in-depth research Killbourne noted that in most cases female actors were just used for their appearance to showcase the product and they were never given a voice, or at best only played a supporting role to the male lead. And when they did have a speaking part, either as a voice over actor (VOA) or even a leading on-screen role, it was only to sell products that were specifically targeted to women, such as skin-care and beauty products, or cleaning supplies.

Where once men dominated 91% of voiceovers in the mid 70s, by 1998 that number had dropped to 80%, illustrating a growing, albeit steady, step toward gender parity. This was at a time when as women’s voices became louder off-screen, so too were their voices louder on-screen. Big name companies such as Apple and Nike were making big strides to closing the gender gap, and their attempts showed in their campaigns. Gender roles had changed from what they were in the 50’s and this was beginning to be reflected in the advertisements of this time.

In the adverts of today, when you consider the voice over industry, gender awareness is now coming to the forefront. The way audiences consume media, and the audiences themselves, has changed significantly, and this has placed more scrutiny on the images and voices that represent, or fail to represent, them. Now female voice over artists are specifically hired to cover a wide range of gender-neutral products and services that were once exclusively covered by men, including the likes of cars, banks, airlines and technology.

Since the time that TV and radio advertisements began, it’s long been held that a man’s voice somehow “cuts through” to the audience better than a woman’s, but now more than ever before, big industries are turning to the power of the female voice over to sell their products, and it’s proof that many of the adages no longer apply.

Benefits of using a Female Voice Over?

A Female Voice can Target a Wider Audience

A study in the Journal of Advertising looking at the effects of male and female voices in ads, found that although the voice over gender didn’t matter for male-oriented or neutral products, the gender did matter for female oriented products. That means, that a female voice can be effective for male-associated products, but a male voice is rarely suitable for those targeting a female audience.

A feeling of trust can happen within an instant, even after just a single word is spoken in fact. Psychologist Phil McAleer produced a study with the University of Glasgow and found that female voices were considered the most trustworthy.  Because females tend to be the more nurturing gender by nature, their voices are generally softer, sound more compassionate, understanding, and overall less aggressive.  This is often why there’s now a very current trend for female voice overs to produce content for the likes of life or car insurance, banking and even car advertisements.

The Unexpected can Generate a Response

Historically, male voices have been chosen for male-dominated audiences and female voices for those containing more women. But, as I noted above, the trend for gender norms is changing for today’s society. By using a female voice in a typically male-dominated setting (and vice versa), this can give the audience an unexpected surprise and generate a greater response to the advertisement. 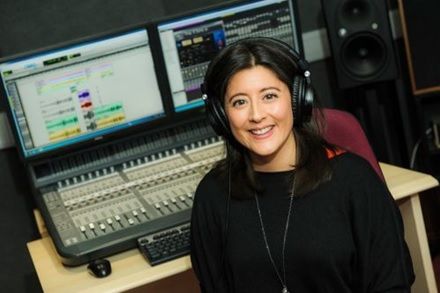 Having spent over 15 years working as a marketing, comms and PR writer as well as professional female voice over artist for various large companies and organisations, I have witnessed first-hand the rise of the female voice in TV and radio ads. I have written copy for adverts and press releases over the years and although there are great benefits for choosing a female voice for your campaigns, the bottom line is not always down to the gender of your VOA, but rather that you have a professional, experienced actor who reaches your target audience—this lends the ad more credibility, and therefore more persuasion.

Be persuasive with every element you have, visual and aural.